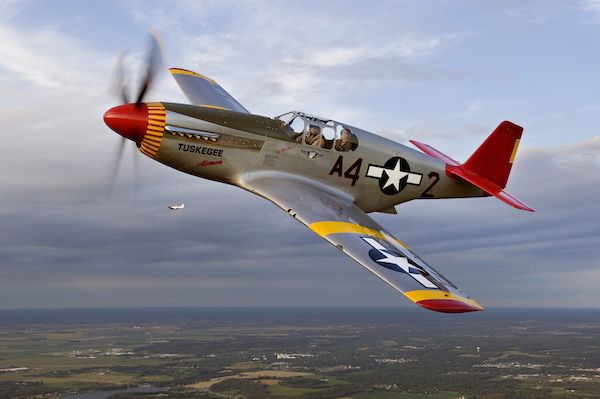 The Commemorative Air Force (CAF) Red Tail Squadron has selected Fort Wayne for an appearance of its Tuskegee P-51 Mustang aircraft and Rise Above Theater production. CAF’s mission is to educate audiences across the country about the history and legacy of the Tuskegee Airmen – America’s first black military pilots. These airmen became legendary because their strength of character, courage and ability to triumph over adversity served to inspire others to RISE ABOVE obstacles in their own lives and achieve their goals. The CAF presentation will include a flight and display of the P-51 Mustang Red Tail aircraft Tuskegee Airmen flew. The Rise Above theater is a 30-seat panoramic film presentation of the Tuskegee Airmen’s story.

The North American Aviation P-51 Mustang is an American made long-range, single-seat, fighter aircraft primarily engaged in service during World War II. The aircraft was designed and built by North American Aviation. The first Mustangs were used by the Royal Air Force as tactical-reconnaissance aircraft and fighter bombers. Toward the end of 1943, P-51Bs were employed by the U.S. Air Force as bomber escorts in air raids over Germany and as fighter-bombers by allied forces. The P-51 was also in service with Allied air forces in the North Africa, the Mediterranean, Italy, and Japan.

The P-51 is powered by the Packard V-1650-7, a license-built version of the Rolls-Royce Merlin 60 series two-stage two-speed supercharged engine. This engine made this aircraft capable of being used as a long-range bomber escort. During wartime the aircraft was armed with six .50 caliber (12.7 mm) M2 Browning machine guns.

After World War II and the Korean War, many of these aircraft were converted for civilian use and are a popular choice in the air racing industry. The Mustang earned such revere and experienced so much popularity that in the 1960s, the Ford Motor Company designed a youthful coupe and named it after the aircraft.